Your login now allow you to access all Heredis services.
You have received an email with the detail of your account data.

Everytime I update my family tree in Heredis I also export branches of my GEDCOM file to use in another program to share with family.

I have connect media, source, etc by ID number. However, whenever I export from Heredis, the ID numbers always change to new numbers.

I asked users of the other program that don't use Heredis and their IDs never change. The only one I found that has the same issue, also uses Heredis.

Is there a way to ensure the GEDCOM IDs for sources, persons, media etc. Don't change with each export?
The only suggestion I keep getting on the forum of the other software is to ditch Heredis and use another genealogy program that doesn’t change IDs. :/

It's extremely time consuming to edit all media etc with each new export.
Top

Regarding the "Sosa" numbering when creating a Gedcom.
The Gedcom standard does not handle the "Sosa" numbering so every time you create a Gedcom the first character that appears is the one whose name starts with an A, unless the 1st character in your individual list has a name between this or numbers....
Which forces everyone to take back the character of his choice and give him the number Sosa "1"

As for the exchanges between the same software, it is normal not to have this concern.

Nowhere the Gedcom standard adresses how ID's should be set …
so each genealogical software, for each of its export, is free to use its own doing, as long as the resulting file can be imported by other softwares in respect of the standard
Sincerely.
Mike
AuroraR8 : Intel Core i9-9900K 3,60 GHz - RAM 16 Go - SSD 1 To + RAID1 2 DD 1 To - Inverter 510 W
W10 Pro - Firefox - McAfee LiveSafe
Heredis EN + FR
Top

A look into the database structure (table Individus) shows the person ID CodeID which can be shown for the user and also be exported as INDI in a GEDCOM.
The field Numero is the user defined number that is exported as REFN in a GEDCOM. 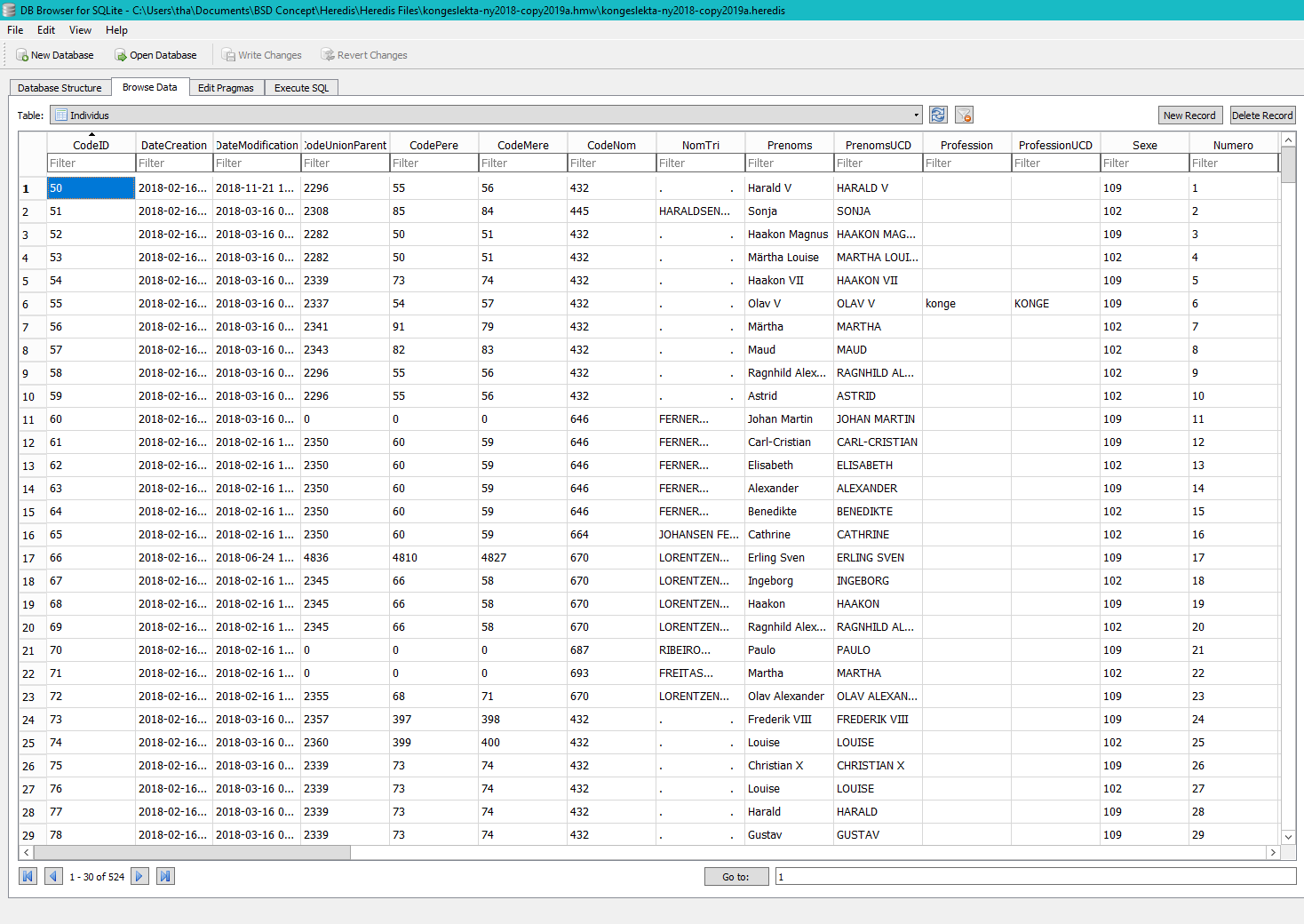 A look at Family Historian shows that the person's IDs are exported as INDI in GEDCOM.
FH also uses the GEDCOM file as its "database".
Top

Thank you for all the responses. From what I can gather you’re saying that there’s no way to keep the same ID’s voor media, sources, persons, etc when exporting a GEDCOM from Heredis and that there’s no standard.

I’m using TNG to share my information and checked their forum as well but it does seem an Heredis related issue.
https://tng.community/index.php?/forums ... f-my-site/

But if I can’t get a GEDCOM to export from Heredis without messing everything up and resulting in me having to reconnect media for 2k individuals everytime, I’ll have to see what my other options and alternatives are.
Top

It is possible to export the media with a Gedcom export in Heredis.
You say use TNG, it is no longer the same approach.
You can contact Heredis who can tell you more about a possible future partnership
Made reference to this news feed in your post: viewtopic.php?p=12490#p12490

It is possible to export the media with a Gedcom export in Heredis.
You say use TNG, it is no longer the same approach.
You can contact Heredis who can tell you more about a possible future partnership
Made reference to this news feed in your post: viewtopic.php?p=12490#p12490


Thanks for your reply. I know exporting a GEDCOM and sharing it with another Heredis user will work fine. I also know that media is exported with Heredis files and Gedcom from Heredis. My issue iss with the ID's changing making it not able for me to use in another software program (not Heredis).

I have already contacted the Heredis team regarding this issue last week, however, I haven't received a reply from them yet. I will wait for a reply with them.

I know the other people using TNG are using genealogical that also don't have a partnership with TNG but they are able to export a GEDCOM which doesn't have changing ID's. That's why I was wondering if there was a way to export a Gedcom from Heredis that also doesn't change ID's.

I'll wait and see what the support team says. But after speaking to several other people that had Heredis before and tried to make it work with TNG it doesn't seem like the support was helpful and they ended up switching to another program. I prefer to use Heredis though, so I'm hoping that maybe a solution for this issue is on the horizon now where it wasn't before. Thanks again for trying to help, I appreciate it.
Top
Post Reply
10 posts • Page 1 of 1

Users browsing this forum: No registered users and 2 guests